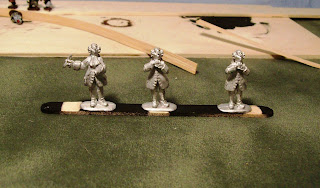 Allow me to introduce the first members of the Cavenderian Diplomatic Corp. (CDC)
You may have seen my thread on http://theminiaturespage.com/boards/msg.mv?id=154760 The thread was based on a discussion of what miniatures might work as a suitable diplomat and my idea of sending the diplomats to other imagi-nation rulers so they could have a Cavenderian observer at their battles. I am under the impression that most of the people on Emporer vs. Elector play in 25-30 mm scale so I was looking for a fig/figs in that scale. Someone suggested Eureka miniatures. I already have a couple of Infantry regiments in 18mm, which I like, so I was very excited to see what they had in the larger scale. I usually order through their US distributor who is always very nice but this thread attracted the interest of the owner, Nic Robson who I was able to correspond with. The figure with the tea cup in the center and on the right usually is sold as part of a set. Nic broke up the set for me and sent a couple of different versions of the miniature, i.e. the one with the brush on the left. Additionally, Nic suggested the figure below. 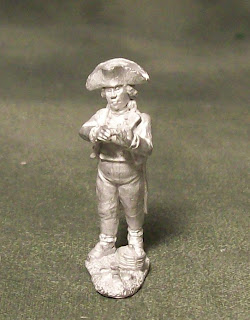 This figure is a wig maker, I have removed the wig stand and head. I think he will make a fabulous diplomat. He has a very pleasant demeaner and the fig is nicely detailed. I will probably need to remove the basket with powder at his feet and maybe place something in his hands.

Once painted up I will put a blog on EvE naming the diplomats and requesting diplomatic relations with several nations including all of the Cavenderian allies fighting the Bizerccans and any other nations willing to open diplomacy with Cavenderia.

The Face of the Enemy and War preperations 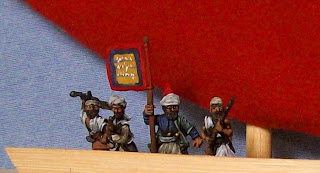 Bashi Bazooks, I hope I spelled that correctly, spotted of the coast near Spilt. Old Glory (OG)15mm Bashi Bazooks. First Attempt I am working on a somewhat cohesive color scheme. The Bashi captain has quite a fearsome crew on their red sailed Xebec. I have ordered a pack of OG Anatolian troops as well, once painted up the raiding skirmishes will begin. 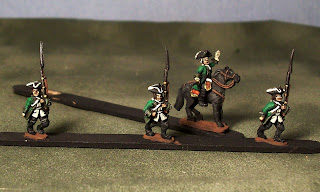 On the workbench the brave Cavenderians defending the coast. IR-Jung with their "somber" dark green on Green attire. 15mm OG Austrians. I have ordered an additional pack of OG 15mm Austrian firing line. I have been using http://www.warweb.com/ and have received good service. 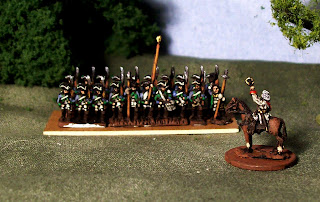 Prinz Geoffrey and a as of yet unnamed general review from left to right IR-1 Die Dame's Fub, IR-3 Prinz Geoffrey, IR-2 von Bear, IR-5 Aurora and IR-8 Jung. IR-2 von Bear has had it's base completed with flocking gel from http://www.renaissanceink.net/ a nice product easy to use and dye able. I am planning a tutorial on my 10mm process and will discuss more a future blog.

Having fun with the camera. 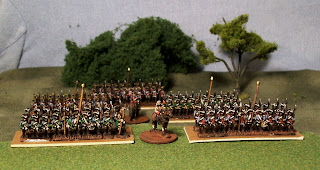 Don't forget to click these pictures to see insanely up close. Please remember in person these would be seen from about 3 feet. 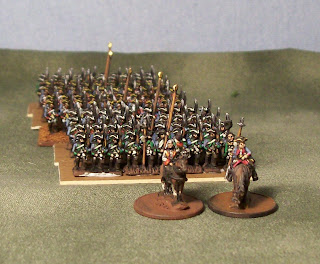 Finally a marching in column picture.

I have been in bed the past week from out-patient surgery and have been rather groggy. I was able to get some painting in this Sunday and completed the above two (2) regiments. Left IR-3 Prinz Geoffrey and IR-8 Jung. I have ordered some more 10mm Austrians and will be painting up more units when they arrive. I posted on the miniatures page about sending out Cavenderian diplomats and Nick from Eureka suggested some of their figs. I have received them and will post the Cavenderian diplomatic corp when completed. Look for my tutorial on painting 10mm and finally I have asked for some Crusader miniature 28mm to paint up for the SYW association convention in March. I hope to get all of the 10mm regiments based with flocking gel and railroad flocking and some of the regimental flags attached soon.
Posted by Prinz Geoffrey at 10:45 AM 9 comments: 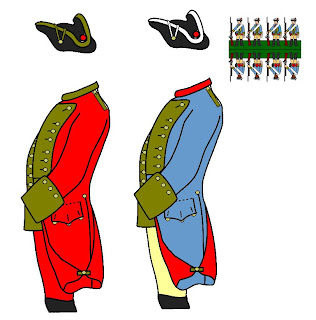 IR-Owen original Welsh uniform, still worn by the officers and modified Cavenderian Uniform.
The following regimental history was provided by the Inhaber.
"Angered by decades of English suppression of Welsh dissenting religious views, and suffering the traditional plight of a people living under the yoke of occupation, many young men from west Wales had been disrupting the English infrastructure, in Wales, ever since the Protestant Settlement under Elizabeth I. Located on the western shore of the Principality they also fell under the influence of the Irish, with whom they had been trading since, well, since St. Patrick was a boy, and had been exposed to the festering anti-English sentiments present in Ireland.

Hardly organized, but passionate in their beliefs, a group of volunteers flocked to the banner of Daffyd ap Owen, a defrocked Welsh priest who bore a grudge against the Anglican church in particular, but all things English. Secretly funded by the Welsh clergy, who maintained a vested interest in reducing the power of the Anglican Church, and openly funded by the Irish, this ragtag regiment had humble origins. What they lacked in organizational skills they made up for with a ferocity in battle that did not go unnoticed by their enemies. Fighting with the just about anyone who could do harm to their sworn enemies, the English and any of her allies, they represented the anger and lack of interest in living or dying that is often found in a downtrodden people.

It is interesting to note that they were also famous for their passion for and skill at choral singing.

Cymru am byth."
The regiment now calls Cavenderia home and once stating an oath of allegiance to the Prinz the uniform was modified to Cavenderian Blue.
I have one more Infantry regiment to complete and then I will start designing cavalry and artillary. I hope to paint up all 10 regiments in 10mm for my initial Might and Reason army. IR-10 will be based on the uniform of Bavarian Regiment Pechmann and I plan on painting the first Battalion up in 28mm to participate in a big battle some day. I have received a pack of Old glory 15mm Bashi Bazouks and am currently painting them up for a Bizerrcan raid. I will post pictures of them on my next blog.
Posted by Prinz Geoffrey at 10:42 AM 5 comments: 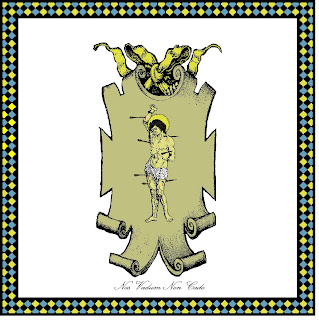 Leib Battalion Flag Designed by David Linienblatt of http://nba-sywtemplates.blogspot.com/ Although the image is final the colors may not be, any suggestions are welcome. The latin at the bottom is from an on-line translator and should read "we shall not fall" but if anyone knows latin and could proof read this that would be great. I really appreciate the extra work David went through to produce this flag. The checkered border is in Cavenderia blue and gold a nod to Bavaria. 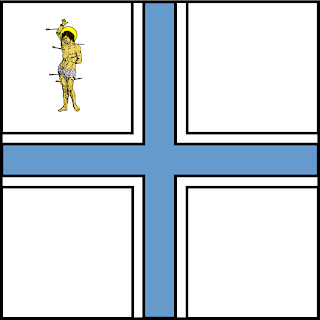 Drum roll please!!! By the order of his highness Prinz Geoffrey new regimental flags have been designed by the renowned artist, David Linienblatt of http://nba-sywtemplates.blogspot.com/

The regimental flag is based on some suggestions by Monsieur Louis of http://mcristobylacew-abdul666.blogspot.com/ 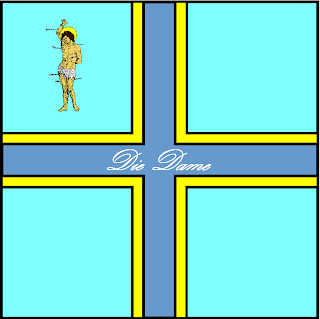 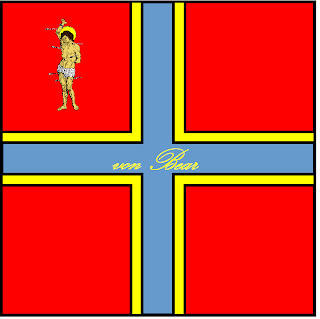 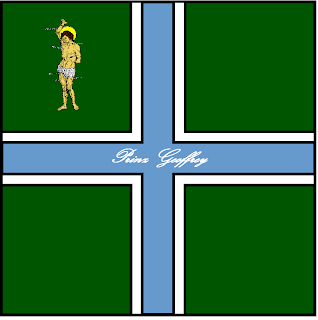 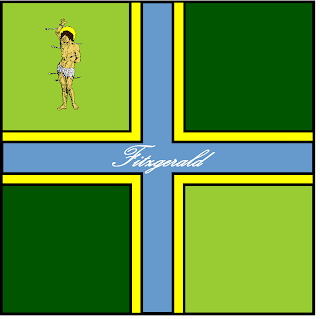 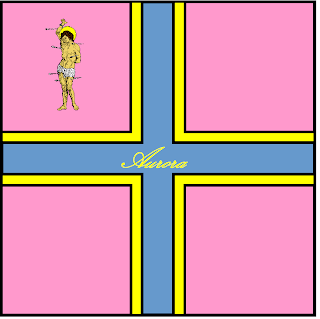 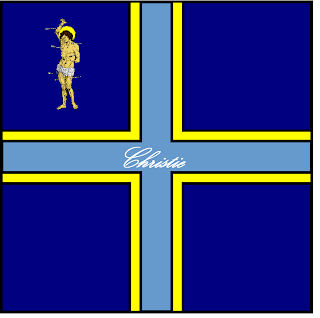 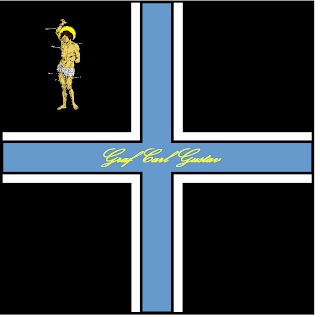 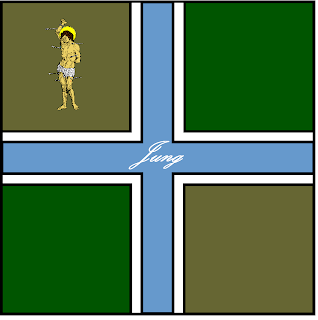 Additional embelishments such as crowns, heraldic shields, battle honors etc. may be added in the future. IR-9 Owens is in the works and Herr Linienblatt has completed the Leib battalion flag as well, it is beautiful and I will be publishing it in a future post.
Posted by Prinz Geoffrey at 10:16 AM 6 comments: 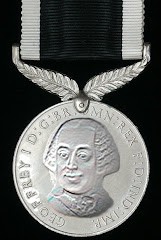